Hazelnut fruit has been consumed relishingly since ancient times. Occasionally having crowned the emperor's table, hazelnut fruit has later become an epitome of wealth and abundance thanks to the boosting and expansion of commerce in the Mediterranean Region.

Cultivable all around the world and highly sought, hazelnut has been a means of living for many families with small businesses dealing with agriculture. Later through expansion of cultivation areas, it has become an important item of export and import.

Hazelnut has been embedded in the lives of people so deeply that its name is cited in literature, folklore, dictionaries, travel books and even medicine from past to today. Hence, hazelnut has been an essential food of humanity.

Written by using various resources, this thesis attempts at providing comprehensive information about historical development of hazelnut, its species and production areas in the world. It aims at presenting the past and riches of the hazelnut.

Having a significant place in our country in terms of protection of economic, social and natural resources, hazelnut plant is classified in (spermatophyta = phanerogamae), subphylum of (Angiospermae), tribe of (Dicotyledonae), sub-tribe of (Choripetalae), group of shelled, order of Fagales, family of Betulacea, species of Corylus. 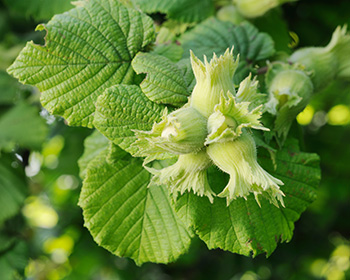 It is known fact that hazelnut is found in wild forms across the mild temperature zone of Northern Hemisphere from Japan, China, Manchuria, Caucasia, through Turkey, Europe and up to North America. The most important species which make up the culture forms are found abundantly in North Anatolian Mounts and North Pass zones stretching from Artvin to Kırklareli. It was 2500 years ago when hazelnut first became a part of our culture. Around 400 B.C., Enophen mentions about a small fruit, Pontus Fruit, as he calls in Pontus Euxinus (today, Giresun) in North Anatolia. On the basis of this ancient cultural trace, it is widely accepted that the motherland of the hazelnut is Black Sea Region of our country and from there hazelnut spread out to world. This fruit has been a commercial good for 600 years. There are 16 types of hazelnut cultivated in our country. In addition, as a result of the selection and hybridization works of Giresun-based Hazelnut Research Institute carried out for 30 years, a further 7 types of candidate have been developed, which can be produced commercially.

Cultivated hazelnut had been taken from North Anatolia, first to Greece, then to Italia, where it started to be produced widely around city of Avella, after which Corylus Avellana L., an important species, is named. It was introduced into Sicily and Spain via Arabians, very commonly found in France, where it was embraced as an important cultigen. In UK and German, the types which mainly comprised of Corylus Maxima Mill and selected among natural flora draw considerable interest. In the US, hazelnut farming has been sprawling out in the recent 70 years, made a significant leap backed up by strong research and development programs.

The word "Fındık" is not Turkish word, while terms like "Bundukdar" was embedded in our older language.

Below is a summary of the linguistical information about the etymology of the word "hazelnut" compiled from world dictionaries.

In Botanic, termed as Corlyus Avellane Pontika, hazelnut, is adopted by Iranian as Funduk and Arabian as Bunduk, also Elculuz is used in Arabian language. In Chinese, it is Chen-tse or Chen-li, its scientific name is Corlyus heterophylla, Fisch.

In Turks outside the Turkey, it is expressed with words that are derived from the root "çit" which is phonetically imitated, another name given by Turks to the fındık.

In Southwestern Europe, the hazelnut was cultivated in city of Abella, Campagnola region, Italy, where, therefore, this fruit was called as Nux abellana, which means fruit of Abella, later called as Avellana.